Well - after 48,361km and now having proper tools, a garage and some spare time, Nick set about doing modifications to Dassie to make her into the 4x4 we wished we had when we started but why make the changes and what did we do......?? 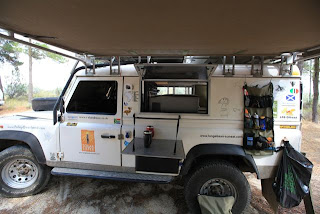 All photos of the key changes can be found at our Land Rover 2.0 Album


We are still tweaking things but the basics of Dassie 2.0 are now complete and we just need to iron out a few more issues.  A recent shakedown trip has shown that most of the changes work well.  The final jobs are now focused on finishing the water system and fixing the solar panel to the roof box on a frame that will allow us to remove it and place it in the sun when we are parked in the shade.

If you want to make contact with Burnco, the people that did an AMAZING job on our side windows and fabricated our aluminium storage box, their contact details are below.  They did a great job for us, on time, offered honest advice and were very competitive on price.  They really know about 4x4 / overland prep and if you were shipping your car to SA to do Cape Town to London or have just finished your trip and need some work doing, I would really recommend you make contact with them for any bespoke modifications.

Happy to take questions on your own build.

African Hills - The ups and downs of 4x4 overland travel

One of the main questions that came back from our London to Cape Town in 10 minutes film was "Its a bit flat", "that's easy" and "where's all the hard roads we thought existed in Africa". 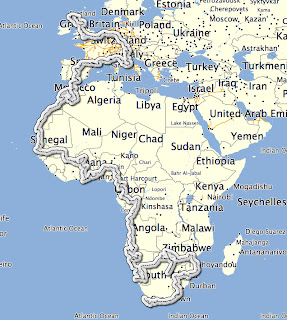 Well, to help develop that thread and answer those questions, we pulled nearly half a million track points off our Garmin database and analyzed the altitude information "You Geek!" I hear you say..... well, yes, to a point but the resulting information highlighted that we went up and down a LOT on our 48,361km drive South and perhaps a little more that we had realized.  The chart below shows the data in more detail. 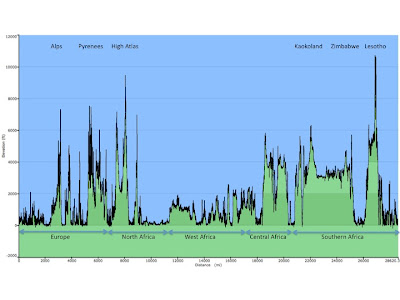 As you can see, its pretty spiky!!!  We have added some indicators to key regions and key countries with Lesotho being the highest we reached at circa 10,600 feet.  Not quite Everest but certainly a challenge.

To answer the other question, "Where's all the footage of the really hard roads", well the simple answer is we tended not to get the camera out when we were really stuck, lost or struggling.....  when its 40'C, your covered in ants, getting bitten and generally sweating like a madman, photography and filming tends to be low down the list of priorities ;-))
Regards

London to Cape Town in 10 Minutes

As part of a look back at our Africa Overland trip, we compiled a 10 minute film that offers an insight into the road conditions you are going to face if you travel the West Coast / Central African route towards South Africa.  From the deserts of North Africa and the lush greens of West Africa to the mud of Cameroon and rain forest of Gabon, this video has the lot. 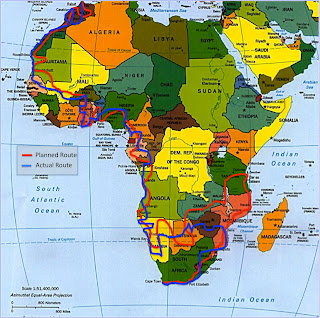 We did a fair bit of off-road driving as well as main roads so the video has a mix of road types for you to see.  We hope you enjoy it as much as we did driving it!