After some initially promising weather we had 2 weeks of grey / cold / rain in Central Europe and to be honest we got a bit sick of trying to dodge the wet weather so accelerated our trip South to Italy!!  Did a nice walk in the Dolomites and now on the Venice peninsula chilling and looking forward to sun, a trip to Venice tomorrow and exploring more of Italy which will hopefully be kinder to us weather wise than Holland, Germany and Austria that were a complete wash out! 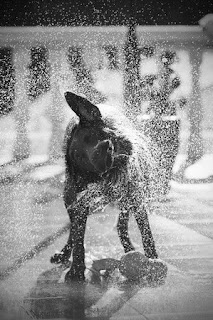 HOWEVER!  One of the downsides of all this dampness has been the "creation" of an interesting aroma in the Landy.  For a while, it was considered to be a "general travel fug" but on closer inspection was tracked down to Nick's flip flops.  This smell resembles that of Eau De Border Collie and it reached "action has to be taken" status after Nick was left in a confined space with a camp site owner as he checked his email (he thought she was just being polite by leaving the door open).  Needless to say, now that its a lot warmer things are "OK" and Vicki is monitoring the status of said footwear for any re-emergence.

The offending articles - thanks Reef!