240 Days….. Forests, more mud and the savanna plains of Congo 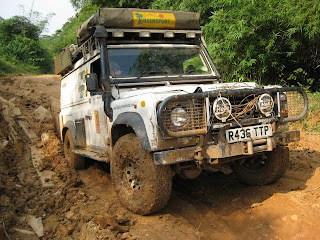 Countries visited – Cameroon, Gabon & Congo (Brazzaville)
Miles travelled – 1990 miles
Sunny days – 28
Coolest night – 20’C
Warmest day – 34’C Although this has been difficult as the humidity has been relatively high
Cheapest fuel – £0.63 in Gabon
Worst road travelled – The 2km from Campo Beach to Campo in southern Cameroon. We managed to do a staggering 500m in 4.5 hours on the way back to Campo after some heavy thunderstorms!!!! We ‘LOVE” orange mud!
Best food tasted – The Vietnamese buffet that we treated ourselves to at the Hotel Hippocampe in Brazzaville and the fish we bought from a boat that came ashore on a remote beach….  We cooked it that night on an open fire!
Best run of free camping – We managed not to pay for any camping all the way through Gabon & Congo equalling 15 days free camping – Get in!
Longest time without a shower – 6 days…. this went hand in hand with our free camping as there weren’t always facilities….  BTW we do flannel wash ;-) 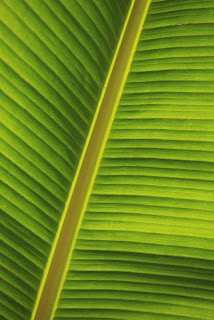 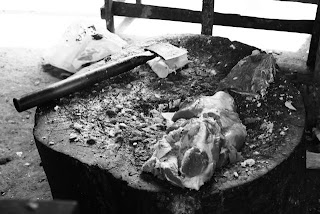 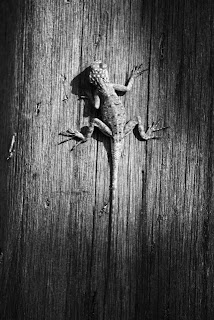 LOWLIGHTS…..
1) Being chased by a taxi driver that crashed into our friends on the outskirts of Doula, Cameroon. We crossed Cameroons second largest city film styleee with Vicks assuming the role of a female version of Bullet in a 3 Ton Land Rover and Nick delving deep into his Carrier Pigeon like navigation instincts to lead all 4 of us to safety……another great escape.
2) The rude man and foul facilities where we stayed at a mission in Younde, Cameroon. Nick continues his adventures in the French Language and managed to tell him in French that “his toilet was full of mothers” instead of S””T by accident but we think he got the message.
3) Seeing lots of bush meat for sale – whilst you feel for people who subsist on less than a dollar a day, seeing a live tortoise hanging by its foot or a dead monkey being held up by its tail lashed to its head by the side of the road makes you realise why there are less and less animals on the planet.
4) Logging – its difficult to drive through a National Park and be surrounded by logging trucks – this can only go on for so long as you cannot re-grow 400 year old, 70m hardwoods overnight folks!!! 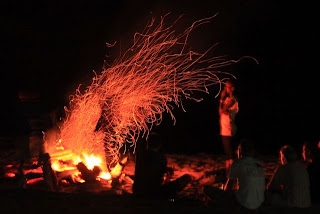 HIGHLIGHTS….
1) Xmas and New Years in Cameroon – we feasted like Gods and had a great time eating fish and relaxing in the sea.
2) Camping on an awesome remote beach where the rainforest met the sea and not an ounce of plastic rubbish lying around either. We whiled the afternoon away by teaching and playing Frisbee with some local boys.
3) Realising just how bad and at the same time, beautiful, the roads can be in Central Africa.  They take you into places you have only seen in books and films with truly spectacular vistas.
4) Nick finding the T55 Torx bit so that he could check the gear box oil…..  DON’T LEAVE HOME WITHOUT ONE if you have the R380 gearbox!
5) Wild / free camping in some bizarre places – police stations could become the next Boutique rest stop for the discerning overlander who is seeking security, refined hosts and close proximity to some of life’s more “interesting” town folk.
6) Seeing real Army Ants at close quarters – they are VERY aggressive when poked with a stick!
7) Crossing the Equator and arriving at the Congo river….It’s BIG!
8) 100 miles of sandy road into Congo….. The Mother of all sandy roads!  Although I think we timed it well with the rain :-0
9) We’re famous!!!! Well almost, Vicki was interviewed for a radio programme in Brazzaville. A radio journalist who spotted our Land Rover came over to chat about what we were doing. Very kindly the interview was done in English and we also used the opportunity to promote Solar Sister. The journalist was very interested in where we had been and how we have found travelling in Africa and meeting locals. 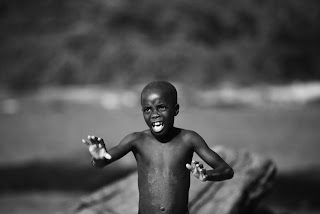 RANDOM FACTS….
1) Father Christmas (our Italian friends) brought us a new washing machine, yay!
2) Africans are very adept at travelling along the worst roads on motorbikes and still manage to look absolutely immaculate with not a splash of mud on them, we can learn from them.
3) We were so tired after our mud episode on New Years eve that we had to start our midnight celebrations with a lie down and several cups of espresso before steadily progressing to several Brandys and Baileys……we were a lot more “awake” at 4am.
4) Nick (for his birthday) purchased a very “fine” whisky called ‘Black Stallion’ (made in India 43% Vol).  He has it on good authority that this particular drop of Fire Water (a more apt description as it happens) is popular with Congo truckers and Chinese road construction gangs……. we think it might become a Cadeaux for a border post guard sometime soon or maybe simply as an aid to stripping tar from the chassis as and when required. 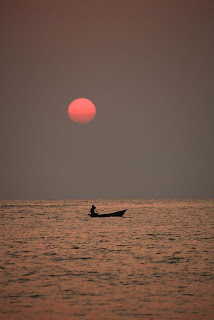 We use the Engel fridge products

Posted by Nick Bradshaw at 1:35 PM